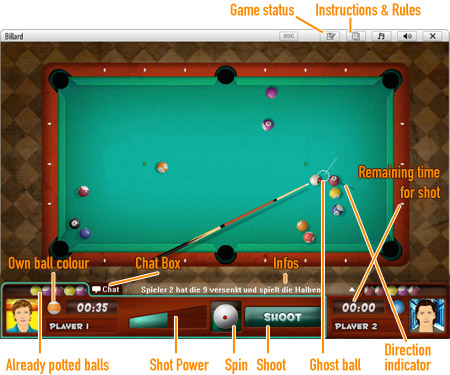 Aim of the game

Pot all of the balls of your colour (spots or stripes) and finally pot the black 8 ball in order to win the game.

At the start of the game, the break will determine who goes first. In order to decide this, both players hit the white ball against the cushion at the right-hand side of the screen (the bottom cushion) and aim to finish with the white ball as close to the cushion at the left-hand side (the top cushion) as possible. The player whose ball stops closest to the top cushion wins the break and starts the game.

In duels with more than one round, the player who lost the previous round gets to break in the new round.

The white cue ball can be placed anywhere in the left third of the table for the break.

The "ghost ball" is there to help you aim. This shows where the white ball will connect. In order to place the ghost ball, there are two options:

Of course you can combine all of the techniques. Firstly, click roughly near the ball which you would like to hit and then move the queue to the correct position.

Use the left and right arrow keys on your keyboard in order to adjust the direction of the shot more finely.

You can set the power as you wish. Click the shot power box in the desired position. Alternatively you can use the arrow keys on your keyboard to increase or decrease the power.

The shot power will be reset to a medium pace after each shot.

Tip: The shot power does not increase at a constant rate. This means that when setting a low shot power, smaller increments are possible.

The results of the spin depend on several factors, such as the shot power and the distance between the white ball and the ball which is hit. In general, the following applies:

A comprehensive explanation of the effects of spin is not possible here. Experiment in different situations with different amounts of spin in order to get a feeling for how much spin is required in each situation.

Spin, however, does not affect the direction of the ball which is hit.

Once you are happy with your settings, take your shot. To do this, press either the "space bar" or the "Enter" key on your keyboard or click on the "Shoot" button.

Normally you take your shot with the balls as they are on the table when it's your turn. If your opponent has committed a foul, for example by potting the white ball, however, then you receive ball in hand.

Ball in hand means that the white ball can be placed anywhere on the table. There are no restrictions, as with "pub pool" (such as playing the white ball over the centre line), except when a foul is committed on the break.

In order to place the white ball, drag the ball to the correct position by clicking and holding the left mouse button. You can also change the position once you have let go of the ball.

For each shot you have a limited amount of time. The clock begins counting down as soon as it's your turn. If you do not take a shot before the time runs out, your shot will be counted as a foul. Your opponent will receive ball in hand.

If you exceed the allotted time twice in a row or more than three times in total, you lose the game!

Click on this button in the grey bar at the top of the screen in order to see the current game standings.

Click on this button in the grey bar at the top of the screen in order to get an overview of the instructions and the most important rules.

You can send your opponent a message with the chat button.

There are three options when sending a message:

GameDuell's 8-ball billiards is predominantly based on the official 8-ball rules of the DBU (German Billiards Union).

The game is therefore not played according to pub rules but rather in accordance with the professional rules.

After breaking, the table is always "open", i.e. it remains undecided who is "spots" and who is "stripes". The decision is made after the first ball is potted.

2. Conditions for valid shots and fouls

At least one of the following requirements must be fulfilled for a valid shot:

Game Rules
Event
Explanation
Timer
You have 45 seconds per shot.
Time Foul
Exceeding the time limit results in a foul.
Double Time Foul
If you exceed the allotted time twice in a row or more than three times in total, you lose the game!
Foul
Opponent receives ball in hand.
Potting a Correct Ball
The player who potted the ball has another shot.
Winning Rules
Event
Explanation
Win
You get 1 Point for potting all of the balls of the assigned colour (spots or stripes) and finally pot the black 8 ball in order.
Lose
If your opponent wins, you receive 0 points.

Summary of the rules

Here are the most important differentiations from the standard rules for "pub pool":